A 24-foot tall statue of Johnny Kaw, the Pioneer Kansas Wheat farmer, stands in the Manhattan City Park. The statue was constructed in 1966, eleven years after the Manhattan Centennial celebration that inspired George Filinger to write the story of Johnny Kaw.

The 1955 centennial committee had trouble getting people and the media interested in Kansas history. Fillinger, a professor of horticulture at Kansas State University, believed that a tall tale character might spark interest. He created Johnny Kaw to be Kansas' answer to other heroes like Paul Bunyan and Pecos Bill. 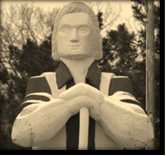 Johnny created the Kansas landscape, geography, and pioneer trails. He dug the Kaw River Valley, planted wheat, invented sunflowers, and grew giant potatoes. Johnny even controlled the weather, lopping the funnels off tornadoes and wringing out the clouds to end droughts. His pets were the Wildcat and the Jayhawk, who, though fast friends, enjoyed a good scrap now and then. The result of their fights was the Dust Bowl.

Johnny didn't take kindly to Paul Bunyan tromping down his wheat so he had quite a fight with the other big fellow and used his nose to plow the Mississippi River Bed. He even went west and helped Finn McCool dig the Grand Canyon and then piled up the rubble to form the Rocky Mountains. Filinger had a fine tall tale imagination, and his stories captured the interest of people across the state. Johnny was intended to be a Kansas figure, not simply a local Manhattan one, and he was careful to include as much of Kansas as he could.

There were three small statues of Johnny before the large 24-foot-tall one was erected in City Park in 1966. Mrs. Walter O'Neill of Manhattan sculpted the first one for the centennial. It was featured in City Park during the 1955 Centennial , but it was beheaded by vandals. It was then moved to a farm, where someone backed a wagon over it.

The statue cost approximately $7,000 and was erected at no cost to the City, though it far exceeded construction cost estimates of $3,000 to $3,500. The group hoped the statue would establish Johnny Kaw as a local legend and prove to be a tourist attraction. The statue is constructed of concrete over a steel beam framework. The design was intended to withstand wind and weather and be easy to maintain. Two local businessmen donated the steel and concrete; other businesses gave materials or reduced bills, and donations were solicited to pay for construction.

Those interested could join the Johnny Kaw Club and receive a membership for just $1.00. In 2017, the new "Friends of Johnny Kaw" citizens group continued this Pioneer spirit to give the area around the statue a facelift – and more importantly add signage to identify the Great Kansas Wheat Grower and highlight some of his accomplishments. The Johnny Kaw Club card is back, but with inflation, it is a $5.00 item in 2017 – a real bargain. To learn more, visit the Friends of Johnny Kaw Facebook page. 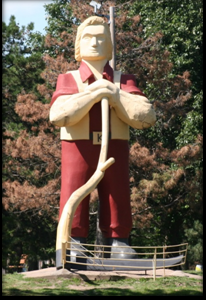 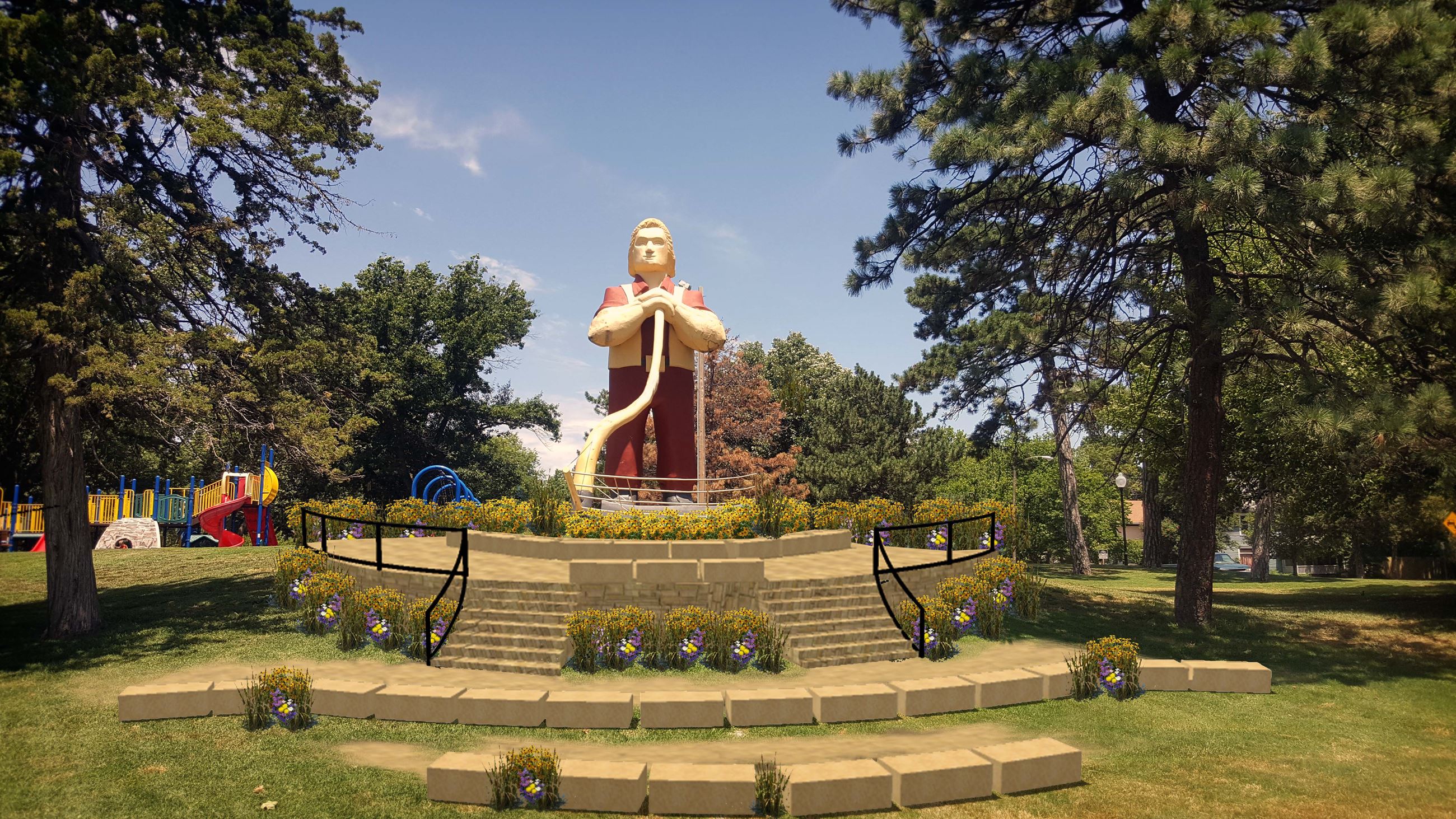 Q: Johnny Kaw is a fictional character created in 1955. Who wrote the legend of Johnny Kaw?
A: George Filinger, a professor of horticulture at Kansas State University.

Q: Johnny Kaw is credited with lots of great adventures including carving the Mississippi River, digging the Grand Canyon, and building the Rocky Mountains. He was also an inventor. What did Johnny Kaw invent?
A: Sunflowers

Q: How tall is the statue of Johnny Kaw in City Park?
A: Johnny is 24 feet tall.

Fun Fact: The Roundhouse, originally known as Floral Hall and later Horticultural Hall, is actually Version 2.0. The first roundhouse building was built in 1874 but was destroyed in a Kansas windstorm that year.

Q: Which of the following facilities has NOT been built in City Park?

A: Football stadium. There was a proposal in 1937 to build a football stadium for Manhattan High School in City Park, but voters rejected the bond issue. It wasn't until 1966 that Bishop Stadium was built in CiCo Park instead.

What about those other facilities? They were all in the park at one time or another.

Fun fact: A second rest stop was located on South Highway 40 at the corner of 17th and Colorado, a site known today as Long's Park.

Q: How was the low area in the southeast corner of the park created?

A: A brick-making operation. In the 1860s and 1870s, the Ulrich Brick Factory excavated clay from the city park to make bricks that were used to pave streets and build a few brick houses. The clay had a unique yellow color, and a few yellow brick structures can still be seen around Manhattan today.

Q: What year was the James W. Barry Rose Garden planted?
A: 1930. The Kiwanis Club donated funds to plant the first roses. James W. Barry planted and cared for them for many years. The garden was named in his honor in 1936.

Q: A hard freeze killed all of the roses in the rose garden in the winter of what year?